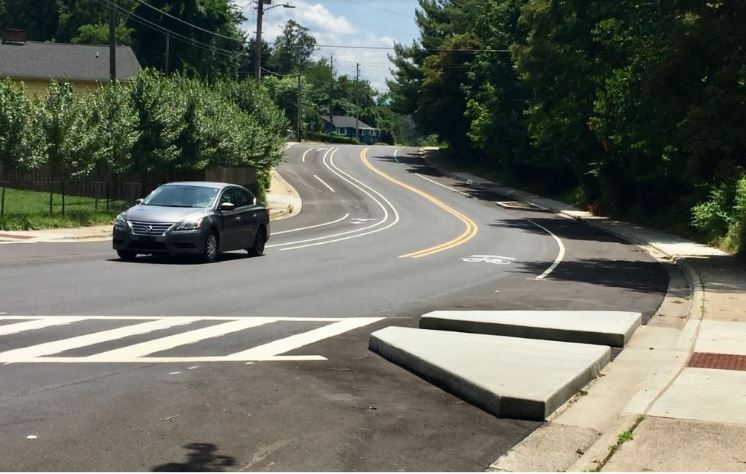 Update The City of Asheville joined with the East End/Valley Street Neighborhood Association July 14 for a ribbon cutting to celebrate the completion of one of the City’s first big bond projects — the resurfacing of Martin Luther King Jr. Drive.     Original story   Everyone is welcome to join City officials, staff and members of the neighborhood for [...] 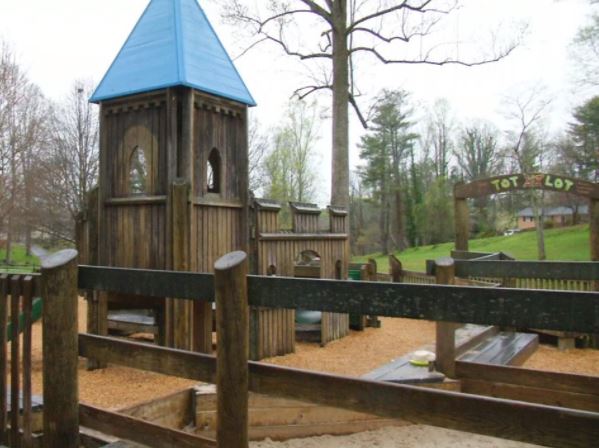 The most prominent feature in Jake Rusher Park currently is the playground.   New amenities are coming to Jake Rusher Park in south Asheville! Before the City finalizes the planned improvements, staff want to check in with residents on the park concept crafted from earlier community meetings. A park concept plan will be presented for residents to review and [...] 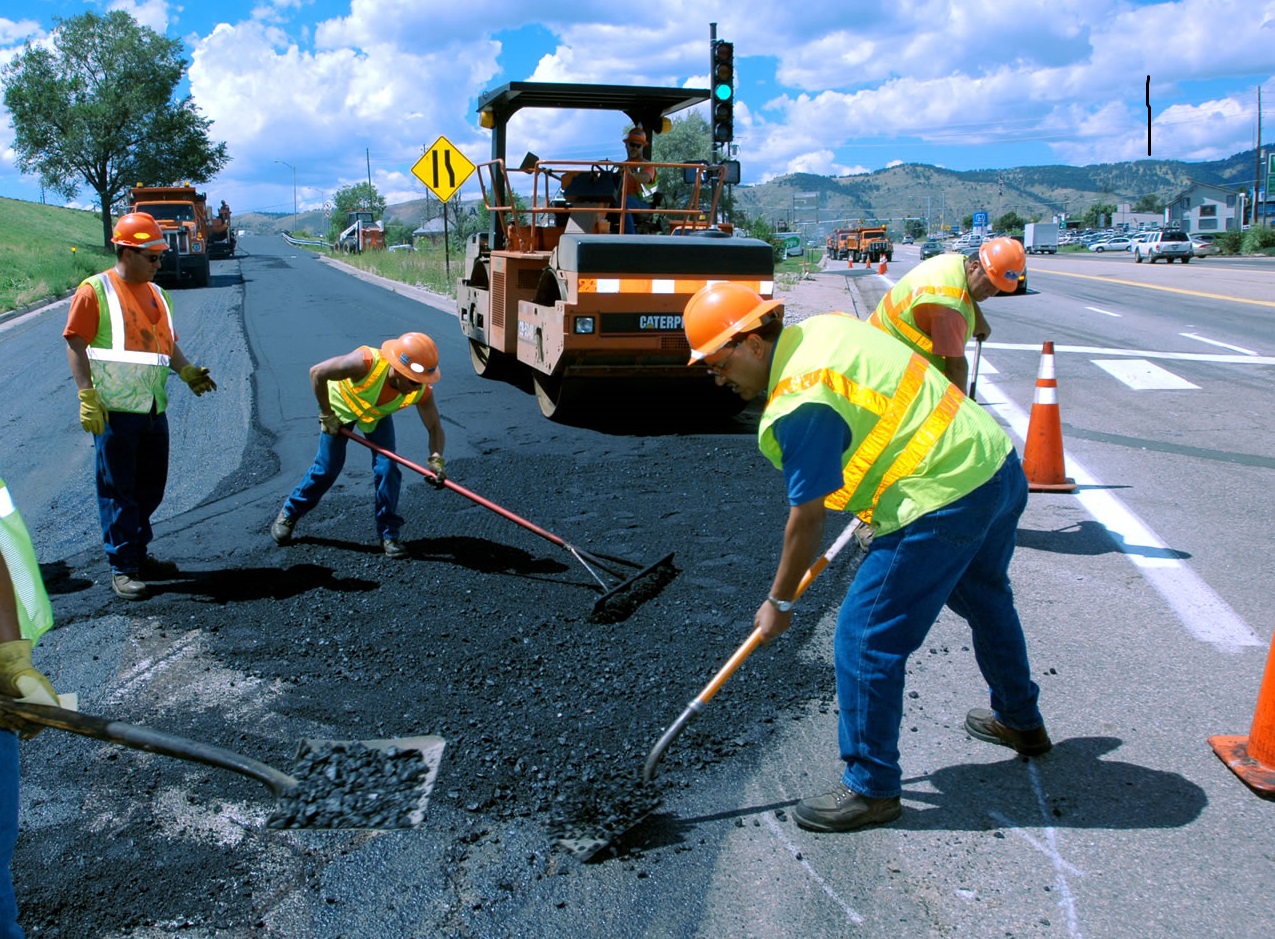 Multiple Asheville paving projects get under way this spring
Posted on March 20, 2018March 13, 2019 by Polly McDaniel

Bond and Capital projects combine for increased resurfacing of City streets   The month of March brings highly anticipated warmer weather and the first day of spring. For Asheville Public Works, this spring also ushers in paving season as never before. Thanks to the bond referendum passed by Asheville voters in November 2016, the City’s investment in many [...] 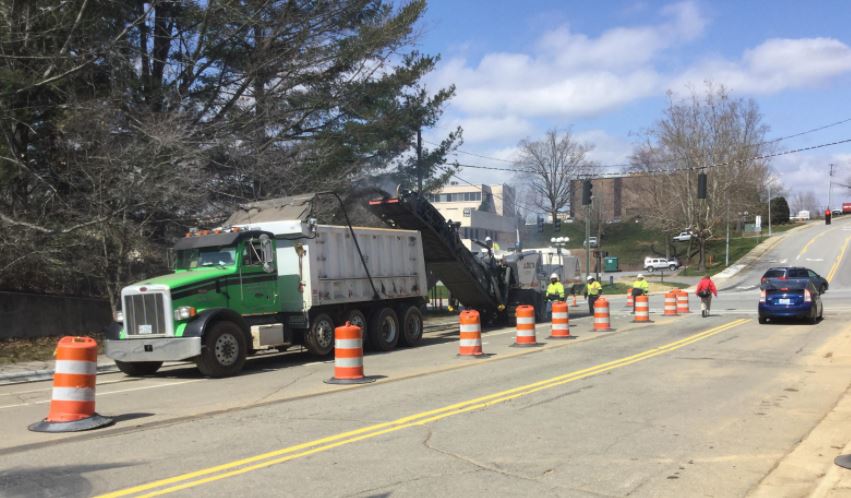 The City of Asheville would like to thank everyone for their continued patience with the work that has occurred over the winter months along Martin Luther King Jr. Drive.   Public Works is now taking the next step of this project. Unfortunately, this step will be much more disruptive to the neighborhood. This phase started on Monday, [...] 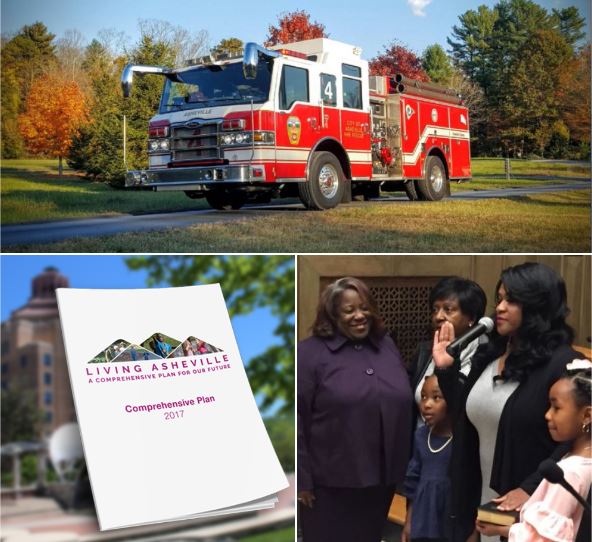 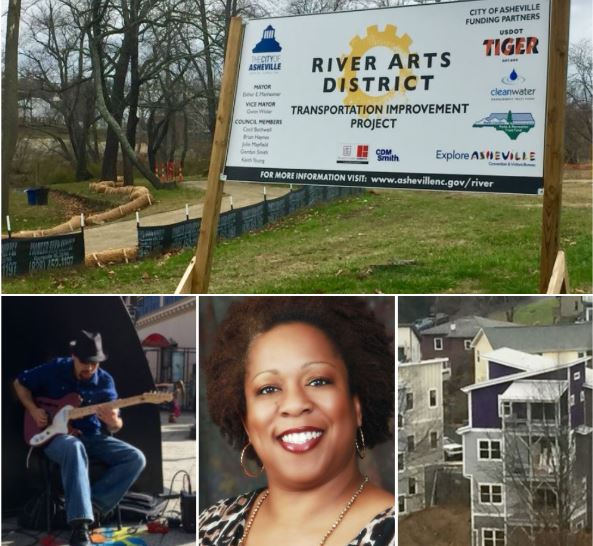 2017 in review: Bonds and RADTIP get off the ground, equity initiative begins and more
Posted on December 28, 2017February 1, 2022 by Polly McDaniel

With 2017 nearly in the books, it’s time to take stock of City of Asheville initiatives and developments from the past year. Here are 10 initiatives that your City government got off the ground in 2017. We’ll have 2018 initiatives to look for in another roundup Jan. 1.   Bond projects began In November 2016, Asheville voters approved $74 million [...] 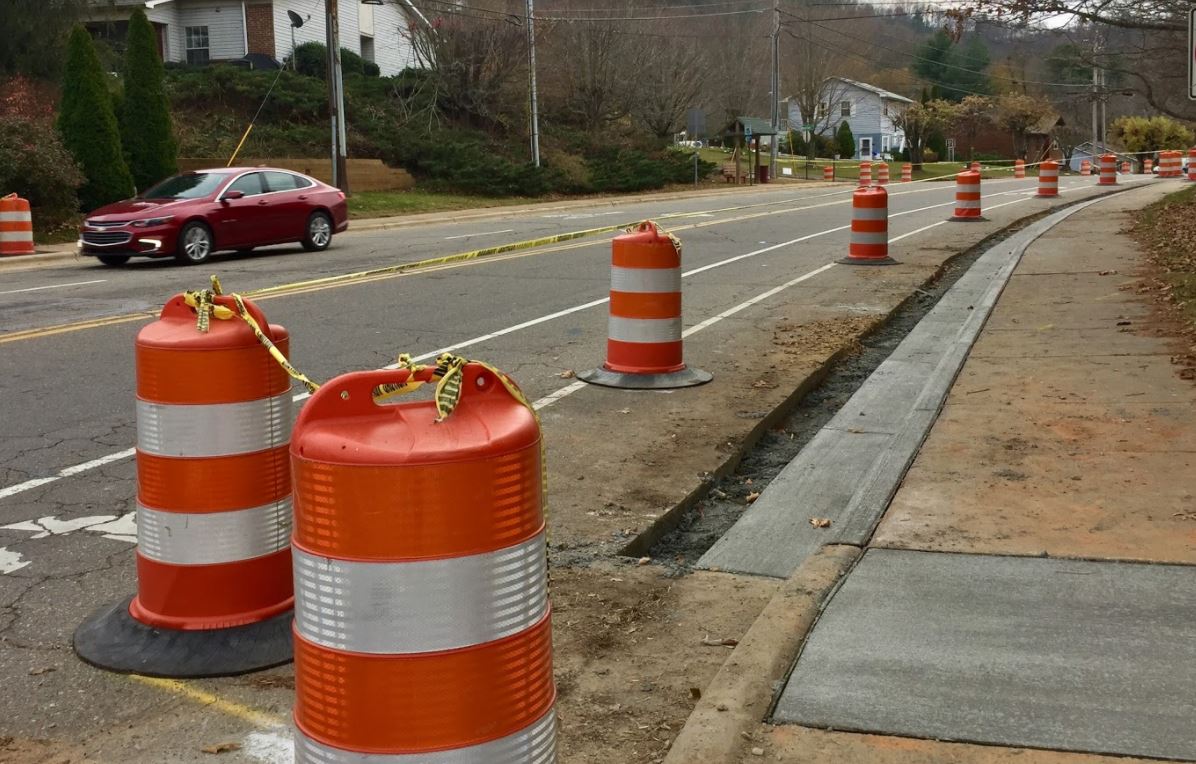 What’s happening on Martin Luther King Jr. Drive? Sidewalk, curb and gutter replacement is beginning on the east end near College Street in advance of a road resurfacing project of the entire length of the street in spring. Orange construction barrels have been placed on both sides of the street along the length of Martin Luther [...]

Today, Oct. 20, 2017, The Honorable Superior Court Judge William H. Coward ruled in favor of the City of Asheville in a lawsuit regarding the Nov. 8, 2016, voter-approved bond election.   Judge Coward ruled that that the General Obligation Bonds at issue are valid and the City can legally proceed with issuing the bonds and the [...] 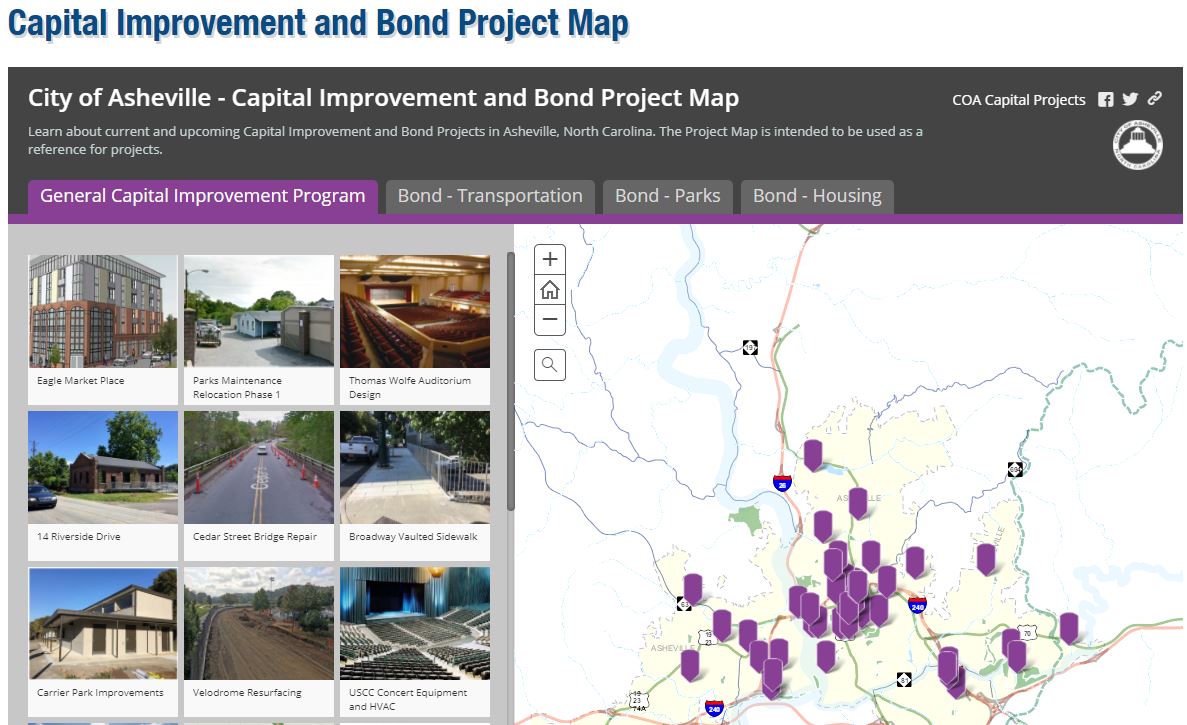 Online tools track City of Asheville capital improvement and bond projects near you
Posted on October 4, 2017September 9, 2019 by Polly McDaniel

City of Asheville staff have been hard at work creating online tools to make General Capital Improvement Program (CIP) and 2016 Bond Project information more accessible for everyone.   New tools include an online dashboard and project map that provide users with information on project locations, timelines and budgets. The project map displays general [...] 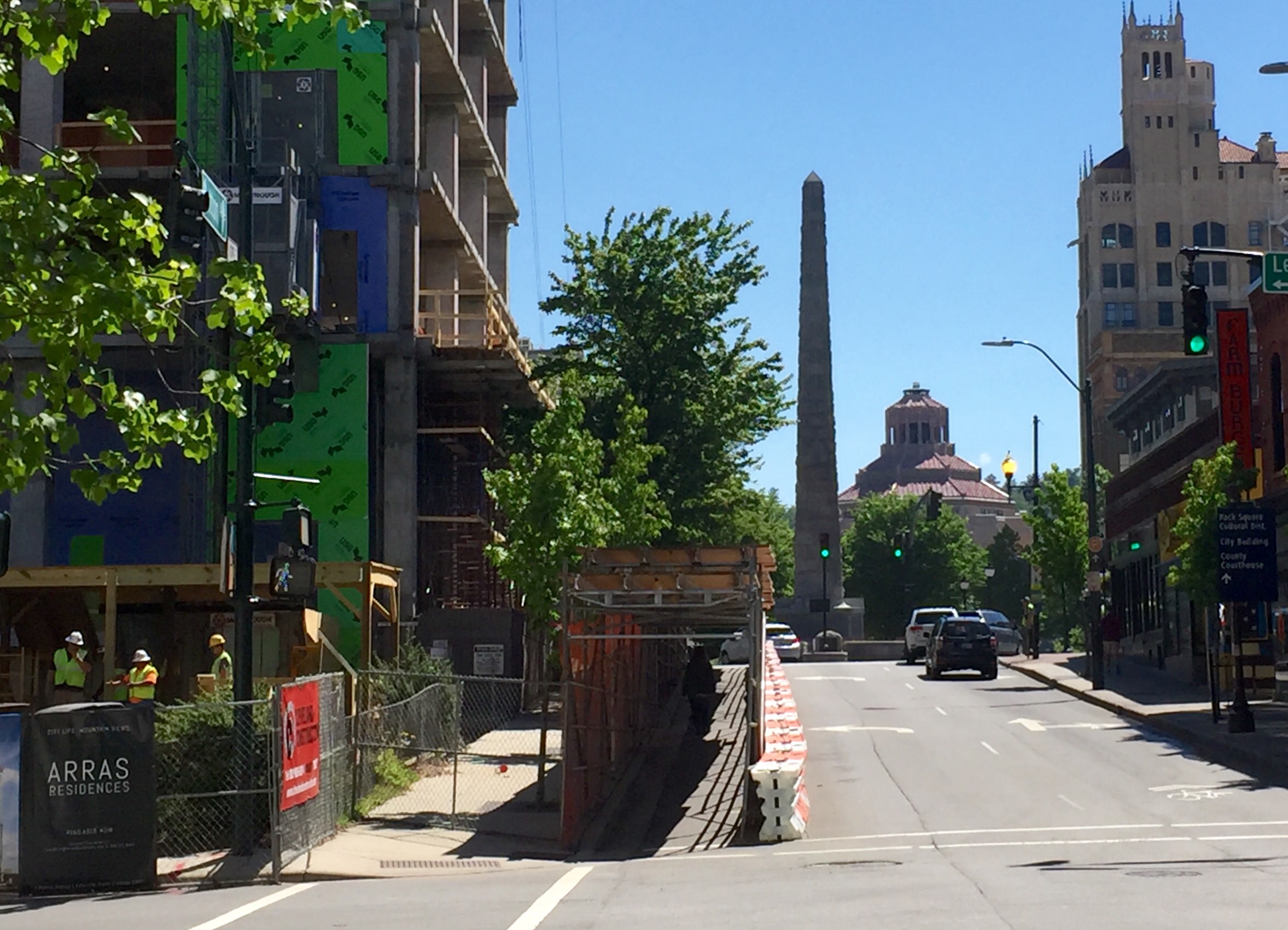 Asheville bonds, strategic development on agenda for Development Forum
Posted on May 15, 2017March 13, 2019 by Polly McDaniel

Want to learn about the City of Asheville’s new Capital Projects Department and get an update on implementation of General Obligation Bond projects? Find out about these projects and more during the spring edition of the Asheville City Manager’s Development Forum. Set for 11:30 a.m. to 1 p.m. Friday, May 19, at the U.S. Cellular Center Banquet [...] 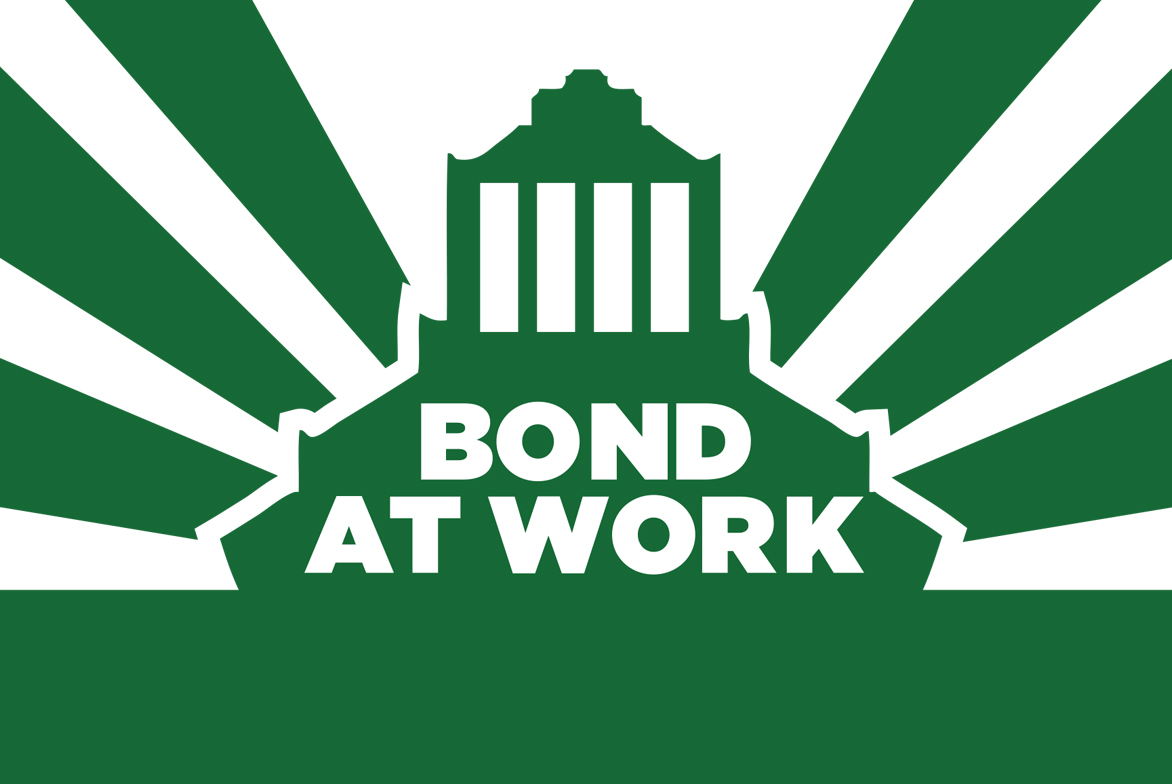 Parks have always been important gathering places for members of our community. They give people of all ages an area for outdoor recreation and healthy activity, and a venue to take in the fresh mountain air. In November 2016 the community voted yes to invest $17 million dollars in general obligation [...]