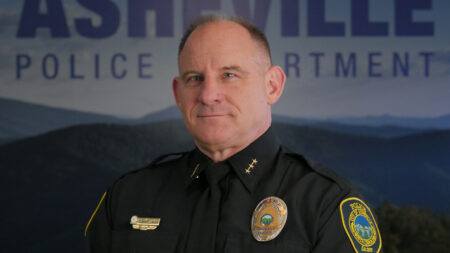 David Zack was appointed to Chief of Police for the Asheville Police Department on February 4, 2020. He began his career in law enforcement in 1984 where he worked as a New York State Corrections Officer at both Sing Sing and Attica Correctional Facilities. In 1987 he joined the Cheektowaga Police Department and rose through the ranks serving in a number of different roles, including patrol supervisor and Detective Bureau Commander, before being named Chief in 2011. During his career in Cheektowaga he also served as the President of the Erie County Chiefs of Police Association, President of the New York State Association of Chiefs of Police, and was a member of the Board of Governors of the International Association of Chiefs of Police.

Chief Zack’s other accomplishments include introducing the first Fair and Impartial Police (FIP) training program in the state of New York, receiving the National Federation for Just Communities Law Enforcement Leadership Award in 2016, and the National Alliance for Mental Illness (NAMI) President’s Award for his role in creating the first crisis intervention team in Erie County.

Chief Zack holds a Bachelor of Science in Criminal Justice from Hilbert College and has been an instructor of forensic science and crime scene photography for several colleges and universities. He is also a graduate of the Police Executive Research Forum (PERF) Senior Management Institute for Police.

Deputy Chief James “Jim” Baumstark started with the Asheville Police Department (APD) on November 9, 2015. Prior to his arrival, he served with the Fairfax County Police Department (FCDP) in Fairfax, Virginia for more than 26 years. He held the rank of Captain when he left FCPD to join APD. As Captain, he oversaw operations, administrative, and investigative responsibilities for the Franconia District Station, Criminal Intelligence Unit, the FCPD Gang Unit, a grant-funded Human Trafficking Task Force, and he served as Director of the Northern Virginia Regional Intelligence Center.

Deputy Chief Baumstark received his Bachelor of Arts in History from Virginia Tech. He has advanced leadership training through the Professional Executive Leadership School from the University of Richmond Business School, Key Executive Masters Certificate Program through the Naval Postgraduate School. Deputy Chief Baumstark is also a graduate of the FBI National Academy Session 274.

Deputy Chief Yelton received a Bachelor of Arts in Sociology from the University of North Carolina at Asheville and a Master of Public Affairs from Western Carolina University. He has also completed advanced leadership training through the FBI LEEDA program.