With 2017 nearly in the books, it’s time to take stock of City of Asheville
initiatives and developments from the past year. Here are 10 initiatives
that your City government got off the ground in 2017.

We’ll have 2018 initiatives to look for in another roundup Jan. 1.

In November 2016, Asheville voters approved $74 million of bond projects in three focus areas: parks, affordable housing and transportation. 2017 marked a time of bond project planning, with some projects moving to the design phase. Residents also saw the creation of online bond reporting tools for transparency. Visit the Dashboard for bond and Capital Improvement Projects here. Visit the CIP and Bond Project map here. Some bond projects have already been completed, including the erection of 20 new bus shelters. More are to come. 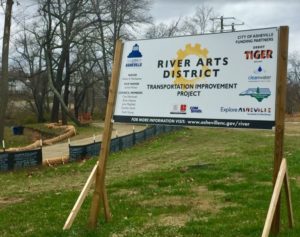 The City broke ground on the 2.2-mile RADTIP transportation enhancement and greenway project in the River Arts District and you can see construction mobilizing there now. After project bids came in higher than projected, the Buncombe County Tourism Development Authority (BCTDA) voted to invest $4.6 million in additional grant funding for the completion of the southern section of RADTIP.

Besides roadway improvements, RADTIP will incorporate new sidewalks, street trees, on-street parking, landscaping, bicycling facilities and stormwater improvements, much of it along Riverside Drive next to the French Broad River.  Visit the City’s RADTIP webpage to keep up with this project.

More community conversation than ever

In late December 2016, the N.C. Supreme Court ruled in the City of Asheville’s favor against the state General Assembly and its 2013 law to strip Asheville of the water system. The decision overturned a Court of Appeals ruling favoring the Legislature. “This ruling ensures that Asheville can continue to own this great water system and continue to provide safe drinking water for years into the future,” Mayor Esther Manheimer said.

Asheville Police Chief Tammy Hooper made cleaning up APD’s evidence room a top priority, when she joined the department in 2016. Prior to her arrival, a 2011 audit of the evidence room found 115 missing items, including guns and drugs. In 2014, the former evidence manager was sentenced for taking evidence from closed cases. During that investigation, police had to start another evidence room and considered the old one compromised. 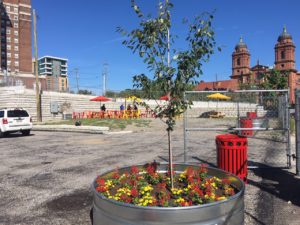 At the direction of City Council, the Asheville Design Center facilitated a year-long visioning project for long-term uses for City-owned property on Haywood Street and Page Avenue downtown. View their findings here. After the findings were presented to City Council in March, Council directed staff to open 68 Haywood Street for a community gathering space  and to seek temporary programs, events and activities to take place on the site while long term planning continues.

Events so far have ranged from a car show to recreational and educational activities as well as a community garden on Page Avenue working with the Office of Sustainability. Find out more here. Regarding long-term planning, an RFQ was released and a team is being selected to develop design options based on the community vision that was developed.

A diverse community serves as one of the goals for City Council’s 2016 Vision. To create a framework, develop resources and achieve meaningful progress toward equity, Council’s Vision stated that “initiatives will be coordinated by a new Equity Manager position.” After community input in late 2016-early 2017, Kimberlee Archie was selected for the role. Her job is to lead the organization in the use of an equity lens when delivering city services, both internally and externally. The City’s first-ever Equity and Inclusion Manager began her work July 31. Look for more on this new initiative as its focus develops. 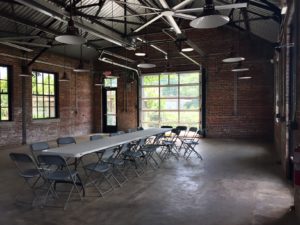 In July, the 14 Riverside Drive Arts & Culture Center opened to the public. Gifted to the City of Asheville by PSNC Energy, the historic building once served as the offices of a manufactured gas plant. This formerly bricked up building on a key corridor in the RAD has been transformed into a special event space. It also provides public restrooms and a place where people entering the area can find information about Asheville’s River Arts District. For rental and FAQ information, visit this link. 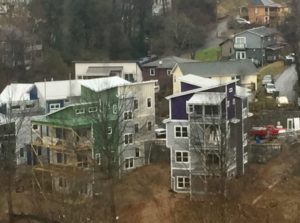 With an influx of new residents and a rising tide of rental and real estate prices, City Council directed staff to look always to increase the housing inventory in the city. The Planning & Urban Design department explored ways that infill development could help address what is often called “the missing middle” in residential housing inventory. Through zoning changes (also known as “wording amendments” to the City code), City Council approved changes to promote more housing inventory in various ways, including duplexes and other multi-family structures in neighborhoods.

To find out more, visit this link on the City of Asheville website.

The triangular-shaped Pritchard Park in downtown Asheville underwent an improvement project that included new LED lighting for better safety, ornamental fencing to protect landscaping, an irrigation system and additional seating areas. Meanwhile, the turf at the JBL Soccer Park was replaced. Parks & Recreation undertook a tree-planting initiative. And Carrier Park improvements occurred, including the renovation of the restrooms, basketball and in-line hockey facilities. The velodrome renovation happened the latter part of the year and will be reopened in January.

Following a robust community conversation between downtown businesses, residents and street performers, the City launched a busking pilot program designed to enhance placemaking, promote safety and balance multiple interests. Two test areas were outlined downtown — one in front of the Woolworth Walk building on Haywood Street and the other in front of the Flat Iron sculpture on Wall Street. Working with the Asheville Busker’s Collective, the City produced a brochure outlining the program and other information and recommendations related to busking. Find an online copy of it here.

A snapshot of other downtown projects:

City of Asheville 2018 initiatives: What to look for in the new year