It’s after 5 p.m. on a Friday evening.  While most people have left work responsibilities behind to begin the weekend, spend time with family and friends, or simply relax, a handful of people have other things in mind.

Debra Allen,Tana Spears, Carlie Townsend, and Janet Weaver are the muscle making up the City of Asheville all female competitive Tap team called Purple Reign. Four women hoping to make a splash in the male dominated water industry.  “I think that as females, we have to work harder and do more just to prove that we belong in this industry, ” says team captain Debra Allen.  “It is hard for us to make a name for ourselves but once we have, there is no holding us back!”

Each team member has chosen to give up personal time to represent the City in the annual Tap competition at the NC One Water Annual Conference to be held in Charlotte December 4th. 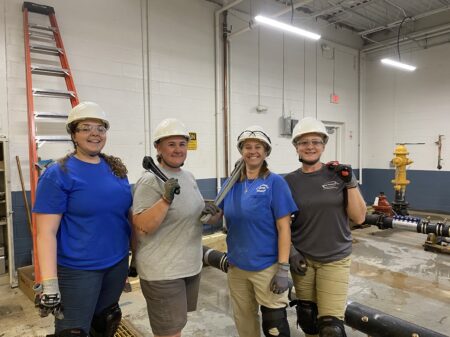 The team gathers for practice at the “wet lab” located inside the Bingham Road Operations facility for Asheville Water Resources.  Away from outside interference and distractions, Janet, Tana, Carlie and Debra,  hone their craft.  They are practicing for the upcoming competition as they’ve done multiple times a week for months.

It’s a competition designed to showcase the skills and speed needed to maintain a water line. A bit of fun around a real world issue any water maintenance crew could face in the field. Purple Reign mentor Brenna Cook looks on intently as the team goes through each step of the process, providing insight for improvement. 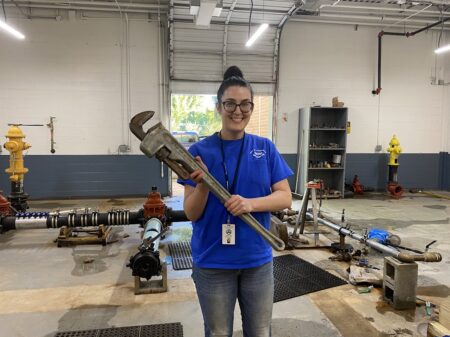 “During competition both the men and women’s teams are simulating what field crews perform when installing a water service line that provides water from the water main on the street to the meter”, says Cook. “The setting is different, no muddy trench, and the tools are slightly different but the idea is the same. The average winning time for the state competition is 2:00 minutes”.

The City of Asheville isn’t new to the competition, or having a team of women “represent”. Way back in 2014, or what is now “ the times before”, Asheville’s first all female team, the Copperheads, was recognized for an outstanding pipe tap time during the 93rd Annual North Carolina American Water Works Association Conference. The team put up a time of 2 minutes 40 seconds.

Cook, an original Copperhead, helped recruit this year’s team.  As the number of women in the water industry grows, so does the competition, but all female tap teams are still rare, says Cook.

It will be the first time in 8 years that the City has participated in the event. At stake?  For these women, it’s bragging rights and personal satisfaction. A side benefit? Showing up for diversity in an industry long thought of as a “man’s world”.

This consistent pattern of hard work, personal sacrifice, and commitment is nothing new for this group.  It is a pact they all made to build a competitive, cohesive team through training and dedication.

If Purple Reign places well in December, they will go on to compete at the national level.