Another eventful year is in the books for Asheville Police Department (APD)! As we look forward to not only a new year, but a new decade, APD would like to thank partner organizations and community members for supporting APD and contributing to what makes Asheville a wonderful place to live, work, and visit. We hope you enjoy the following highlights of 2019 at APD.

Asheville City Manager Debra Campbell named Robert C. White (retired) to serve as Interim APD Police Chief in September. With the search ongoing, a new chief is expected to start in early 2020. Three finalists were introduced to the community during a Dec. 17 meet-and-greet.

APD updated its existing Search and Seizure policy in October to incorporate the use of a written consent form to ensure that residents have a full understanding of their rights regarding consent-based searches. The written consent form provides specific language informing individuals of their constitutional right to decline to give consent. 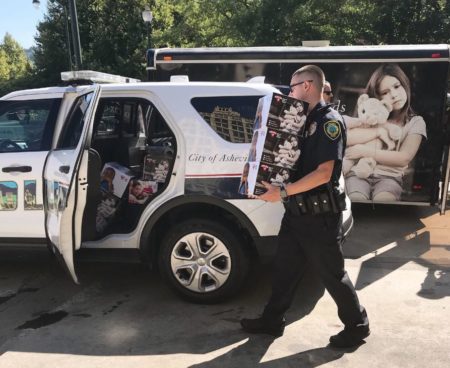 APD partners with local organization to help those in need

Back in April, APD began a partnership with local nonprofit Hearts with Hands. Twice this year, Hearts With Hands has delivered boxes full of food and hygiene products to APD officers, who carried them in their vehicles and handed them out to any person or family they think might have such needs.

In October 2018, APD kicked off a Community Liaison Program (CLP) in order to further its dedication to community engagement and policing. The program launched with the identification of 15 neighborhood or community organizations and paired each with a designated officer liaison. In October of 2019 APD added the LGBTQ+ liaisons. Liaisons meet regularly with community groups, form trusting relationships with members of these communities, and are a direct point of contact for community issues/concerns. 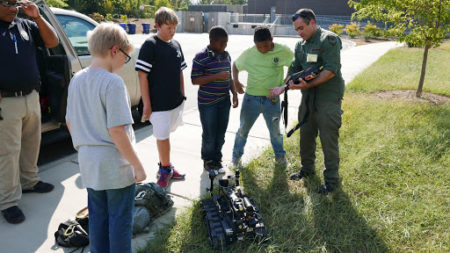 APD and Asheville City Schools joined to launch an In Real Life afterschool program in February. Each week students meet up with APD representatives for a fun learning experience, from driving bomb robots to sitting on a police motorcycle.

In 2019, APD’s 22 detectives investigated a total of 3,873 incidents of crime throughout the city. The following are a few of the most notable events and projects:

Violent Crimes Task Force: In the late spring and early summer, APD saw a significant increase in the number of violent incidents involving the use of firearms. As a result, the department formed a task force in order to conduct focused enforcement on offenders identified as being drivers of these crimes. The task force concluded by making 44 arrests, seizing 44 firearms, 13 of which were stolen, and confiscating approximately 500 grams of various drugs.

Sexual Assault Evidence Collection Kits (SAECK) Project: APD formed a team of investigators to review and submit for testing all sexual assault evidence collection kits in its inventory following a directive given by the General Assembly and Attorney General in 2017. To date, all kits that were identified as being eligible for testing in the agency inventory have been submitted to authorized laboratories for examination. In addition, two full-time investigators have been assigned to thoroughly examine any sexual assault cases that have been identified as being “cold,” or having no investigative leads at the time they were closed.

APD kicked off the year with Fair & Impartial Policing training. The premise of this training is to further the ability of APD employees to recognize conscious and implicit biases, understand how implicit biases impact how we perceive/see actions, and have a departmental understanding that fair and impartial policing leads to effective policing.

APD officers and employees took part in a peer intervention training program that aims to teach officers how to stop a wrongful action by a fellow officer before it occurs. The program, known as Ethical Policing Is Courageous, was developed in 2015 by New Orleans Police Department to promote a culture of policing that focuses on proactively preventing uses of force, rather than punishing officers when the damage is already done.

The following APD officers were promoted within the department in 2019: