At its first meeting of the year, City Council received a report and viewed a video highlighting initiatives accomplished during 2015. Items ranged from the swearing in of Asheville Police Chief Tammy Hooper to the City earning a national award for its SimpliCity search engine. You can view that video at the bottom of this story.

Here are 10 initiatives City staff plan to move forward with the new year, listed in alphabetical order. Narrowing the field to only 10 was a challenge, as there are so many projects underway. Nevertheless, we offer this a snapshot of work your City government is undertaking this year. 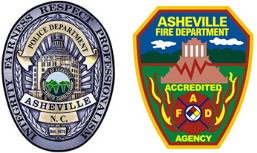 What: This search, rescue and forcible entry training will be conducted as a joint preparedness exercise between the Asheville Fire Department and Asheville Police Department. Armed criminals are becoming more of a safety threat to the general public, especially in our schools. Rapid deployment is a term used to describe a procedure that empowers, trains and equips first responding patrol officers to instantly react to potential armed individual(s) by establishing swift contact with the perceived threat. Members of the Asheville Police Department regularly undergo this training in order to be prepared if this type of threat is present in our City.

Where: MAHEC building of Mission Hospital.

When:  Various days throughout January, February and March.

What: The City of Asheville will hold a pilot program for a Citizens Academy, that will target City Council-appointed boards and commissions. The purpose of the program is to improve understanding, communication, and cooperation between local government and those it serves

Where: Location to be announced.

What: Launch of a newly redesigned City of Asheville website, improving the City’s ability to provide the community information in an intuitive and user-friendly manner. A request for proposal (RFP) has been posted for this project.

Where: Available to all citizens who visit www.ashevillenc.gov.

When: Launch date set for mid-summer.

What:  This year the City of Asheville will initiate the process of updating its Comprehensive Plan.  The Comprehensive Plan is the community’s official long-range planning document, establishing policies that will guide future land use and development decisions. The plan will outline strategies to strengthen community vitality, explore strategies for environmental and economic resilience and propose expanded options for affordable housing. The City is now in the process of hiring a consultant team to lead the public engagement process develop the plan. This will include a series of public workshops to gather community input.

When: This is an 18-20 month process. The schedule for public workshops will be posted once the consulting team is on board, so check back in early spring for more details.

Who: Keep up with this process on the City’s Comprehensive Plan Project Page. Or contact Stacy Merten at 828-259-5836 or smerten@ashevillenc.gov for more information.

East of the Riverway projects

The goal will be to design a public engagement process that will result in developing a neighborhood recreation plan that:

Also, the City will continue its Livingston Complete Streets project with a community meeting to get feedback on a draft design that was informed by neighborhood input at the beginning of the process.

Where: The enhancements will serve the Southside community as well as City residents at large. The Walton Street Park and Pool are at 570 Oakland Road. The Dr. Wesley Grant Sr. Southside Center is at 285 Livingston St.

When: A Livingston Complete Streets meeting will be held in February. A meeting on Walton-Grant recreation enhancements will be held at the Dr. Wesley Grant Sr. Southside Center in March. Dates to be announced.

For more information: Visit ashevillenc.gov/ParksRecreation. Also look for an announcement on the meeting dates on Asheville City Source, and the Parks & Rec Facebook page and postings at the Dr. Wesley Grant Sr. Southside Center. 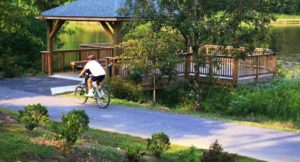 What: Our greenway system is growing, and this year we’ll start construction on segments that connect existing greenways.  Our four-year goal is to have a connected system of greenways that will run on both sides of the French Broad River in the River Arts District PLUS connect West Asheville to downtown and Beaucatcher Mountain. When we are finished with the construction of the greenways we are currently planning, we will have more than 10 miles of connected greenways.

Where: The River Arts District Four greenways are in the process of being planned this year:  The Clingman Forest Greenway, Town Branch Greenway, the French Broad River West Bank Greenway and also the East Bank Greenway (this is part of the RADTIP road improvements). The Beaucatcher Mountain greenway that will be constructed begins at Memorial Stadium and climbs Beaucatcher Mountain.

When: Construction on the French Broad River West Bank has already begun. The segment that begins at Craven Street and travels south to the West Asheville Bridge (Haywood Road) will be officially open this spring (2016). Construction of the other greenways will begin in 2017 and be completed by 2019.

For more information: Visit the Greenways page on the City of Asheville website. Or contact Lucy Crown, lcrown@ashevillenc.gov.

What: The City of Asheville Transportation Department has been conducting a study of parking needs related to the Haywood Road corridor. In 2015, the Kimley-Horn firm did an assessment of available parking and met with business and property owners to understand their needs.

Where: The study area is 2 ½ miles along Haywood Road from a point east of Patton Avenue to just past Beechum’s Curve, including 300 feet on either side of the road.

What’s next: A draft report should be submitted in the near future. Once the draft report is in hand, Transportation staff will review it and provide suggestions to be incorporated into the final report. A tentative timeline:

There is no timeline for implementation yet. 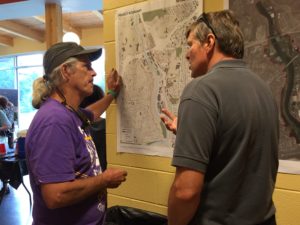 What: The City of Asheville is working with the community and a consultant to replace the zoning in the greater River Arts area with a form-based code, which is a type of zoning that focuses on the form and placement of new structures on parcels instead of relying on a list of permitted uses.  The Haywood Road Form-Based Code was the first code adopted by Asheville in September, 2014. The River Arts District is the second area to be piloted for this tool. City Council designated funding for this project in the FY2014-15 Budget.

Where: The River Arts District including areas on Riverside to the north of I-240, and south on Depot Street. The area also includes the western side of the River along Craven Street. Click here for a map of the area.

When: Workshops were held this summer and was followed up by a draft report, released this fall.  A draft code will be released in early March, to be followed by public feedback meetings.  Staff expects that the final code will be reviewed by City commissions and City Council in fall 2016.

What: As part of the City’s long-term waste reduction goal of 50% municipal solid waste reduction by 2035, staff is exploring new strategies to reduce residential solid waste. Among these strategies is Pay as You Throw (PAYT), a usage-type model, in which a variable rate is charged for municipal solid waste services based on the volume of trash produced. In 2015, the Office of Sustainability conducted a citizen survey about recycling methods, and PAYT. In September, residents were invited to two information sessions on PAYT. The City’s Sustainability Advisory Committee on Energy and the Environment (SACEE) and the Planning and Economic Development Committee heard a staff report on PAYT.

What’s next: The Sustainability office will be exploring how other cities have managed fixed income customers during implementation. A tentative schedule is that the matter is expected to go next to the City Finance Committee, then back to the Planning and Economic Development Committee. Then it could go to City Council in February. 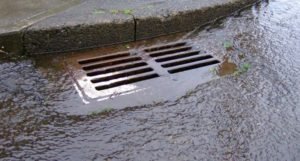 What: We’re checking up on the public stormwater drainage system this year to identify any repairs or upgrades that might be needed within the next decade. Then we’ll plan out how and when to make those changes for both the short term (to help reduce localized flooding) and the long term. And we’ll be looking for opportunities to use green infrastructure like rain gardens that will help to clean water while slowing the stormwater flow.

When: The City of Asheville will hold a public information session 6-8 p.m. Jan. 28 at NEMAC/RENCI. We expect a draft year prioritization list in late winter, and a draft 10 year priority list in the summer.

But first, a look back