Following this week’s flooding of the Swannanoa and French Broad rivers, only 1 street remained closed in Asheville Friday morning. Now it is open too.

The portion of  Lyman Street closed by flooding earlier this week has been reopened. There is still some standing water, so please us caution in the area.

The City of Asheville is actively managing water releases from the North Fork Reservoir Dam in accordance with the City’s Flood Operation Plan and Emergency Action Plan. Safety is foremost in all decisions.

The North Fork Reservoir has built-in capacity to withstand most prolonged rain periods. The City of Asheville Watershed Manager closely monitors weather patterns, as well as stream gauges upstream and downstream of the reservoir.

During the past week, the City has releasing small amounts of water from the reservoir to correspond with the amount of water coming into the reservoir from rainfall in the immediate area and runoff received upstream.

Also of note, from midnight until 11:15 p.m. Tuesday the North Fork Water Treatment Plant received 5.06 inches of rain. This brought the dam to capacity, requiring today’s release of water.

See video footage of Swannanoa River flooding in Biltmore Village at this link.

See video footage of flood waters powering through the Azalea Road Bridge at this link. 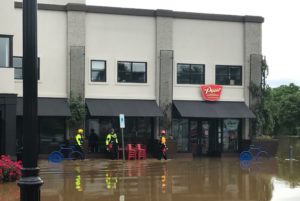 Members of the Asheville Fire Department Boat Team 2 headed out to double check buildings in Biltmore Village Wednesday to ensure they are all clear.

Governor to declare State of Emergency

Gov. Roy Cooper issued a statement saying he will declare a state of emergency for WNC.

The declaration allows the state to coordinate storm response and prepare for any additional impacts, according to a news release.

“Our emergency response and transportation crews have been working through the night to keep North Carolinians safe as conditions deteriorate,” Cooper said. “But this storm isn’t yet over. I’m urging people to keep a close eye on forecasts and flood watches, and asking drivers to use caution especially when traveling in our western counties.”

Due to the loss of a water line that provides water to part of the Town of Black Mountain, the City of Asheville’s Water Resources has provided a portable pump.  The pump will provide water to customers that have been out of water since midnight Tuesday morning.  We expect the pump to run through June 5.

The French Broad River Greenway has flooded and is also closed.

For your safety, DO NOT attempt to drive around barricades or through high water. Remember, turn around, don’t drown.

Mark yourself as safe on social media

Facebook has a new feature where people can mark themselves as safe in an emergency zone. Mark yourself safe during the Western North Carolina flooding at this link.