Home / News / City of Asheville in 2016: Initiatives and progress

With the new year at hand, we at the City of Asheville thought it would be a good time to take stock of some 2016 initiatives. Guided by City Council’s 2036 Vision, here are 10 areas where we enhanced service to our citizens.

The City’s management team is currently developing project plans, schedules and communication tools to deliver quality projects in all three areas approved by voters. Led by City Council, the bond issues reflect Council’s 2036 Vision, under the Smart City heading which reads, in part: “We use our debt capacity and revenue wisely in order to maintain and improve the City’s infrastructure…” 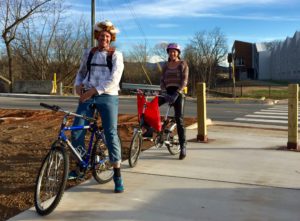 A half-mile section of new greenway opened this year! The French Broad River West Greenway Craven Street Phase (from the Smith Mill Bridge to the West Asheville Bridge) is complete and the greenway has opened to the public. Look for the mistletoe arch on the greenway to celebrate the season! The City plans a formal ribbon cutting celebration in the spring.

And more greenways are in the works. Designs for the Clingman Forest and Town Branch are finished and have been sent to the Capital Projects Team to begin construction. The Beaucatcher Greenway is seeking bids for construction and we plan to take the contract to City Council in January.

In 2015, the City of Asheville’s Office of Sustainability partnered with the Sanitation Department to launch a public housing recycling pilot project in the Southside area. The City distributed 278 bins. On average, about 3,025 pounds of recycling was collected per month.

In 2016, the program was expanded to 228 units to the Hillcrest community and 160 units to the Deaverview community. The City plans to further expand the program to the Pisgah View and/or Klondyke areas. The goal is to eventually reach 1,116 public housing residences with this program. The Public Housing Recycling Program has  funded by Community Waste Reduction and Recycling Grants. Asheville GreenWorks has helped with outreach and implementation on these projects.

In March, the City launched a new online engagement tool, Open City Hall Asheville, as a way to amplify outreach and get more resident feedback on City issues and initiatives. The aim is for City staff to use that public input, in addition to other traditional means, to help guide the decision-making process.

So far, Open City Hall Asheville has had more than 4,200 unique visitors with 1,445 of them subscribers — and we’d love to have more! Weigh in on topics at ashevillenc.gov/OpenCityHall.

Please note that registration (which is quick and easy) is encouraged, though not required to participate. Information gathered is used only to verify that the input received is from a local source and is not shared with any third party. 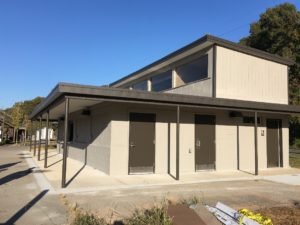 2016 was a big year for Asheville’s biggest park. Carrier Park improvements included renovation to the restroom/event registration building, court resurfacing on the inline hockey rink, basketball court resurfacing, including improvements to the backboards/goals and benches. There were also general landscape planting improvements around the inline and basketball courts, including serviceberry trees (edible berries!). The restroom renovation made the facility ADA compliant and the building now features changing facilities. The cost for these improvements was around $600,000, with funding from the City’s Capital Improvement Program. 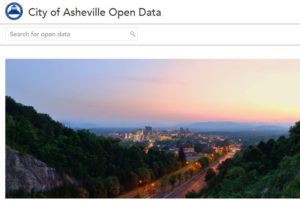 Our data is your data. That’s the thinking behind the City of Asheville’s Open Data Portal. Supported by City Council in 2015, the portal got a major boost with a redesign in 2016. It contains all kinds of information, ranging from local Census data to how many National Register of Historic Places there are in Asheville and where to find them.

So go on the City of Asheville Open Data Portal, check it out. Don’t see what you want? Make a data request.

“As people ask us for data, we will share it through the new site whenever possible to make it more widely accessible,” said McNamara.

Looking for crime data? it is also available online; find it on the City’s SimpliCity search engine. Type in a street or address to find out what’s going on in your neighborhood.

In 2016, Asheville City Council provided support to the City’s Food Policy Action Plan as part of Council’s 2016-2017 Strategic Plan. That support came by way of the City budget with funding for efforts by Bountiful Cities, Asheville Greenworks, Patchwork Urban Farm and ASAP’s leadership of the Downtown City Market.

Bountiful Cities received funding toward a Coordinator for the Asheville-Buncombe Food Policy Council. That Coordinator will examine policies and practices of the City and Buncombe County, bringing them together to reduce food scarcity, plan for food emergencies and support urban agriculture in Western North Carolina.

Asheville Greenworks is working in a partnership with the City to establish the “Adopt a Spot” garden program, for edibles and for pollinators.

The City’s Sustainability Office launched its Food Policy Action Plan webpage where you can find a Homeowner’s Guide to food policy and production. There are planting guides, reference lists, information about residential food production, Bee City USA and a lot more. 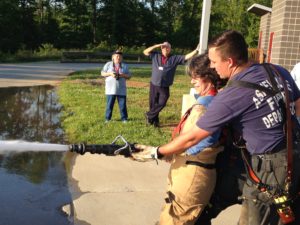 The Asheville Fire Department held its first Citizens Fire Academy, in an inaugural program the department hopes to build on. During an eight-week course running April through May 19 participants got an up-close look at the many facets of AFD operations. There was a hazmat day, medical day, rescue operations session, ladder truck operations day and engine company operations day.

With the help of engaging with hands-on activities, the program provided citizens with better knowledge of the technical and operational workings of the fire department. That included going up in the bucket in a ladder truck or test operating a fire hose.

“People learned a lot about the fire department, things they didn’t know we did,” said Deputy Fire Marshall Kelly Hinz.

The program will repeat in 2017. Applications for the program open in January. The Citizens Fire Academy will meet on Wednesdays for nine weeks starting March 29. Visit ashevillenc.gov/FireDepartment.

City Council directed staff to review alternatives for a potential process for the future use and design of two city-owned properties located at 68-76 Haywood Street. Dubbed by local media as “The Pit of Despair,” the properties — which measure approximately 0.55 acres in total — are on the southern side of the intersection of Haywood Street and Page Avenue. The Asheville Design Center facilitated a community-led visioning process with open houses and input from an advisory committee. The City’s online public engagement platform, Open City Hall Asheville, was deployed to get more input on potential uses for the space, ranging from a park to an outdoor performance space — and much in between. Council asked the committee to narrow its choices of recommended uses for the property, which were presented to Council Dec. 13. Stay tuned; the advisory committee will report to Council again in the first quarter of 2017. Keep up with this project here.

The City’s Transportation Department moved multimodal methods of getting around Asheville to the forefront with completion of the Asheville in Motion plan.

The Asheville In Motion initiative (AIM) is designed to provide a cohesive strategy and method to prioritize transportation projects, with an aim toward improving multimodal connections. It works with our existing pedestrian, bicycle and transit plans.

“The AIM plan is intended to have a holistic approach, bringing sidewalks, bike lanes, greenways and public transportation to people where they need it and take them where they need to go,” said Mariate Echeverry, City of Asheville Transportation Planning Manager. “By doing so, it helps improve our community’s quality of life and health, and increases access to jobs.”