The partnership
The City of Asheville, Buncombe County, and the Economic Development Coalition for Asheville-Buncombe County (EDC) were critical partners to seeing the New Belgium Brewery and the greenway to fruition. Tax incentives were a tool used to court New Belgium, but the City’s plans for improving the River Arts District’s walkability and intermodal infrastructure compelled New Belgium to partner on making infrastructure improvements.

Additional partners enlisted included Duke Energy, which donated land to ensure a viable connection to the next phase of the greenway, and the Municipal Sewer Authority, which allowed the greenway to use significant portions of the sewer right-of-way. Funding partners on the project also included the US Department of Commerce Economic Development Administration, and RiverLink, through a grant with the North Carolina Clean Water Management Trust Fund, as well as the GoldenLEAF foundation.

New Belgium contributed $50,000 for the development of the Buncombe County Greenway System and money towards connecting bike lanes to the site. Of the $150 million total cost of the New Belgium site, the City of Asheville is contributing $1.8 million for the greenway and associated amenities, and another $5.1 million for work on the project, including integrated stormwater management, a stream restoration, street and interchange improvements including the addition of sidewalks and bike lanes.

The City and New Belgium used a team of consultants to develop a greenway plan. Once the plan was finalized, the City of Asheville designated staff to manage construction of the greenway portion of the site as well as the future trailhead. Construction of the brewery – and the greenway – are underway now.
“It has been exciting to work on this continued partnership,” said McCray Coates, the City’s Stormwater Services Manager. “The City is excited to be making the improvements to the area and is excited about the work taking place along the river.”

The French Broad Greenway is part of a larger greenway system. The New Belgium Brewing site will be connected via a greenway extension to the French Broad River Park, Carrier Park and Hominy Creek Park providing the single longest greenway in Asheville when complete. In the future, this section of the greenway will connect across the river to the Wilma Dykeman Riverway and miles of greenway and multimodal improvements planned for that side of the river.

One of the greatest features of the greenway is the constant view of the French Broad River, which on any given weekend is chock full of kayakers, canoeists, fishermen and tubers.

The south end begins at Haywood Road, a major connector to West Asheville, where a new bus shelter will deliver riders to the Brewery and Greenway.  The north end of this project will be at the Craven Street Trailhead, a “Cadillac” trailhead for the City. The trailhead will feature a kiosk, bike parking, a bike repair station and an art installation.

This innovative partnership is a once in a lifetime opportunity that the City of Asheville, New Belgium, and especially visitors and residents will benefit from for generations.

“This greenway will be a place folks want to come and visit in order to take in the views along the river,” said Coates.

Equinox Environmental, which designed the greenway, nominated the City and New Belgium for the Partnership Award. Find information about its role in the project at equinox.wpengine.com.

The timeline for the greenway completion is this winter. 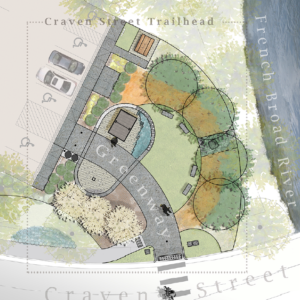 For more information about the American Trails organization, visit AmericanTrails.org.