This entry is part of Park Views, a weekly Asheville Parks & Recreation series that explores the history of the city’s public parks and community centers – and the mountain spirit that helped make them the unique spaces they are today. Read more from the series and follow APR on Facebook and Instagram for additional photos, upcoming events, and opportunities.

Aston Park was Asheville’s first truly modern public park. Like Magnolia, Montford, and Pack Square parks, its land was provided by George Willis Pack. At his request, the 11-acre tract was named for Edward J. Aston.

As mayor three times during the decade when the railroad came to Asheville, Aston was determined to transform Court Square from a stockyard to a community resting area with open spaces, benches, and a public water pump. During his tenure, a new courthouse was completed in 1887 that included a third-story opera house with a seating capacity of over 400. His plan to pave the streets around the square was later completed under Mayor Blanton in 1893.

A major advocate of wilderness in the region, Aston is believed to be the first to promote Asheville as a health resort by writing letters and mailing thousands of brochures extolling the mountain air’s benefits for those suffering from tuberculosis or lung disease. He also donated over 200 books from his personal collection to start the local library system.

Modern for the Times 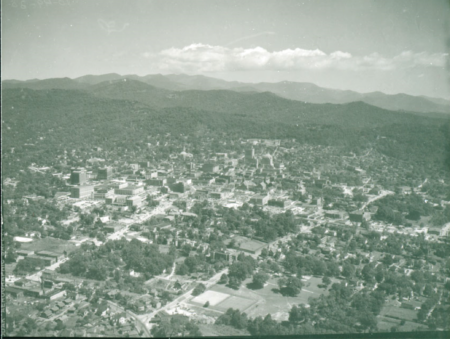 Prior to 1900, most urban parks in America were large, landscaped to simulate nature, and located on the edges of cities with areas for sports and others for contemplation. Aston was part of the small park movement when it opened in 1898, translating the benefit of parks to spaces closer to residential districts. Barn Hill, stretching from modern-day Grove Street to the northeast corner of Aston Park, was a popular spot for picnics, political speeches, and baseball prior to the park’s opening.

Pack was originally from New York, but found success in Michigan’s lumber industry. He and his wife moved to Asheville in 1884 for health reasons. Essentially retired, he had time and resources to contribute to what Asheville would soon become. He gave Asheville Library Association a building for its first permanent home and donated land for the 1903 courthouse. Taking notice of the children who swarmed Court Square, he began funding public education and donated land to become Aston, Magnolia, and Montford parks. The city renamed Court Square to Pack Square in his honor.

Aston and Montford parks’ sand clay tennis courts were a departure from the norm at the time when few courts were public. In addition to its three tennis courts that dated to 1893, Aston Park featured shuffleboard, benches, a ballfield, and a play area. 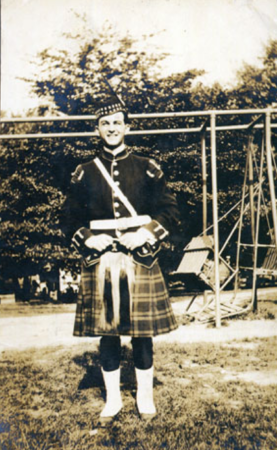 The first playground apparatus ever purchased by the City of Asheville was installed in 1916. It was the first municipal playground in the state, according to the Asheville Citizen. That same year, a swimming pool that had opened only a year earlier was greatly enlarged and touted as the only heated pool in a public park in the nation. In an era of government-mandated segregation, the City spent $5,000 to both enlarge the whites-only pool in Aston Park and build another for Black residents next to Mountain Street School.

These improvements were celebrated with a dedication on July 4 featuring wrestling matches between firefighters and police officers, watersports exhibitions, and “hair-raising stunts by firemen.” The standard curfew and anti-noise laws were suspended for the evening. However, tragedy was around the corner when the Flood of 1916 hit Asheville on July 16 which destroyed the city power plant, cut off travel, and killed more than 80 people in the area.

Aston and Montford parks were still the only public parks at the time, but several private recreation enterprises had sprung up in the growing town. One of the most popular was Asheville Electric Company’s Riverside Park with a horse track, lake, ballfield, casino, and amusement rides. It never reopened after the flood and Aston Park only grew in prominence.

Roaring Twenties, Great Depression, and Beyond 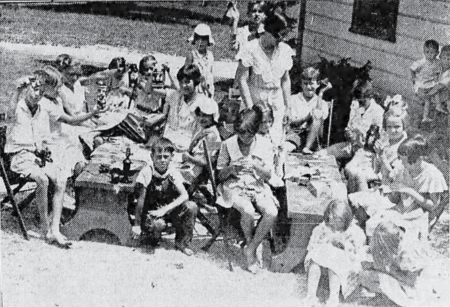 While Buncombe County Courthouse and Asheville City Hall were being built, a popular summer concert series, July 4 celebration, and other events were temporarily moved to Aston Park. The move was so well received that some community members unsuccessfully lobbied for parking to be added. The issue of parking would reemerge in 1968 when the park was one of four sites considered for the Civic Center.

Asheville was not immune to the effects of the Great Depression and nearly all of Asheville’s banks, savings and loan companies, and insurers shuttered in 1930. Grand new homes near Aston Park – some of which had never even been lived in – deteriorated. Few investments were made in the city’s park system for decades, but Aston Park offered entertainment and leisure at little expense.

The Asheville Open started at Asheville YMCA in 1928 and moved to Aston Park in 1931. It is still played there today and stands as the longest consistently-running sanctioned tennis tournament in North Carolina. Dick Covington won the first six titles and two of the next three, but that is far from the only mark he left on the park.

As the tennis center’s reputation for quality courts continued to grow and the City negotiated a smaller payment for its Depression-era debt, three asphalt courts joined the original sand clay courts in 1940. By 1968, the park had four shuffleboard courts, a softball diamond, picnic tables, a picnic shelter, and playground in addition to the six courts.

In 1973, the existing courts were torn up and replaced with six fast-dry clay courts. The park was expanded to 14 acres in 1976, six more fast-dry clay courts were added, and the tennis complex was lighted for evening play. User fees were instituted as the courts required daily maintenance and supervision, in contrast to the asphalt tennis courts at several other public parks. 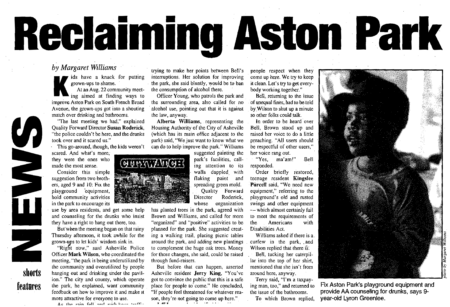 As a result of an agreement to combine water systems under the Asheville-Buncombe Water Authority, Aston Park’s operations were transferred from Asheville Parks & Recreation (APR) to Buncombe County in 1981. By 1983, City Council passed a citizen-requested resolution to resume management of the park and tennis center. Negotiations would start and stop for many years.

By the 1990s, Aston Park had become best known for “drunks, druggies, and trash,” according to a Mountain Xpress article. With Asheville Police Department calling the park a nuisance and public suggestions to erect a chain link fence around it, APR began working harder to establish an agreement to help with the park’s operations. 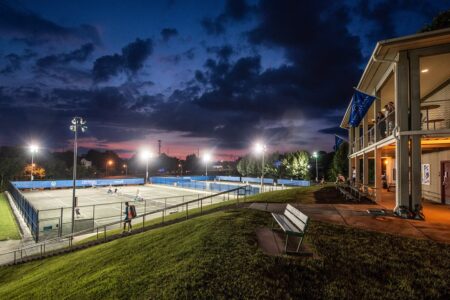 Following dissolution of the joint water authority, Aston Park rejoined the APR system in 2005. At this point, there was no playground and the restrooms had not been in operation for years. Improvements began immediately.

Covington’s relationship with Aston Park spanned decades and he wanted somewhere to house his memorabilia related to tennis in western North Carolina. Consequently, he donated his entire estate for the express purpose of improving Aston Park’s tennis center. With the money, the Dick and Irene Covington Clubhouse was built with a museum area, along with a paved walking trail and other park enhancements utilizing additional funding from the North Carolina Parks and Recreation Trust Fund and United States Tennis Association.

In addition to the clubhouse, two of the courts are named for players long connected to the park. Court 1 is named in honor of Lewis Isaac, an avid tennis player devoted to making the sport affordable for all. Dave Carey played his last match at age 99 and Court 6 is named for him.

As downtown Asheville expands, apartments and other buildings spring up in parking lots and empty spaces around it, but Aston Park still serves its purpose for neighbors to catch up with each other, downtown workers to connect with nature, and kids to develop healthy habits and socialization skills.

Do you have photos or stories to share about Aston Park? Please send them to cbubenik@ashevillenc.gov so APR can be inspired by the past as we plan our future.