On the evening of Sunday, August 7, Asheville Fire Department’s Captain Anna Pigman came across a house fire on Fairfax Avenue as she happened to be driving by. Although off-duty, Captain Pigman took initiative to rush into action when she heard a call for help that someone was still inside the building. Knowing she was first on the scene and that her colleagues would arrive soon to combat the fire, Captain Pigman immediately approached the burning house and walked around to the side where she found a man trying to crawl out of a door. She quickly ascended the stairs, assisted in pulling the man out of the door, down the stairs and away from the building to wait until emergency personnel arrived. The man was transported to the hospital for smoke inhalation and burn injuries. He was later released from the hospital.

Chief Burnette presented Captain Pigman with a chief’s challenge coin for her exemplary service. She will also be recognized at their annual awards banquet.

The City is proud of Captain Anna Pigman and the exemplary courage she displayed. 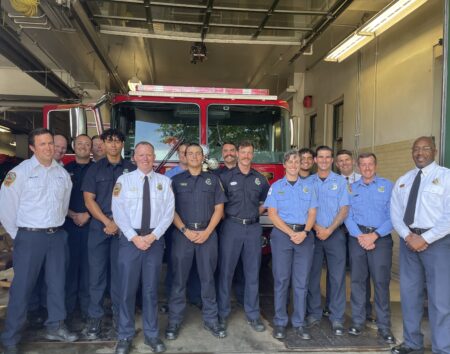