The saying goes that, given a big enough lever (and fulcrum to put it on), you can move the world. That’s a tall order, but it is true that leverage applied at the right place can make a big impact, and leveraging funding is helping make big changes in quality of life and economic development in Asheville.

Leveraging funds, or utilizing one funding source to secure another, builds partnerships, invests in the city’s future and is a key component to the success of City of Asheville initiatives from riverfront redevelopment to bringing the Southern Conference basketball tournament back to Asheville.

By committing $45,000 in Economic Development funds annually, the city joined up with other organizations and the Asheville Buncombe Regional Sports Commission to ensure SoCon’s return. Sponsorships have allowed the city to leverage more than $12 million into renovations for the U.S. Cellular Center. The return on that investment is a sports event that injects some $4 million into the local economy each year.

“Making the commitment to SoCon to invest in our sports arena was crucial to bringing the tournament here,” says U.S. Cellular Center General Manager Chris Corl. “But the partnerships and what everyone brought to the table also showed the community dedication to this event.”

Those kinds of partnerships are also helping to shepherd big changes into Asheville’s riverfront, as leveraged funding enables the city to make the kinds of upgrades in the area that will attract new business and increase transportation options there. As one of the city’s “Innovation Districts,” the River Arts District is an example where local funding meets federal and state support, consistently building momentum to improvements there. 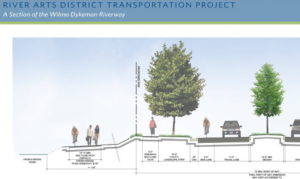 Thanks to the collaboration and coordinated efforts of the City of Asheville, community stakeholders, residents and regulatory officials, the City secured the TIGER II grant in 2010. That funding resulted in a plan for multi-modal transportation network between the riverfront and downtown. Having a plan and partnerships in place led to the 2014 announcement of $14.6 million in federal funding to implement six transportation projects, including the River Arts District Transportation Improvement Project (RADTIP).

“Developing partnerships with local stakeholders and state and federal agencies allows us to get the most out of our investments in these areas, “ says Transportation Planner Dan Baechtold. “Getting this kind of buy in means our resources can go farther toward achieving the city’s goals.”

Often, one source of funding is not enough to address challenges the city faces, like affordable housing. Alongside federal HOME funding and the city’s own Housing Trust Fund, the alignment of goals with other organizations, financing agencies and developers allows the city’s funding to achieve the greatest impact. That’s why fostering these kinds of partnerships is an important part of the city’s 2015 Comprehensive Housing Strategy.

“We can’t go it alone,” says Jeff Staudinger, Assistant Director of Community
& Economic Development. “Fortunately, there is a community of partners who see value in these goals. By working together, we get a more comprehensive outcome and we get the most bang for our buck.”

Investment by the city yielding more investment by partners, and together, those funds advance the goals of the City of Asheville community. That’s leverage.