One of the last of its kind in North Carolina, the City honored Asheville’s past throughout the restoration, undertaking the task of making the bank of three elevator cabs safe, modernized,  and ready to face the next century.

Caretakers of our community’s past

Asheville City Hall is an identified historic national landmark which requires special attention be given to preservation of key elements, including the original 1928 elevator cab design.  Layer upon layer of general care and maintenance slowly covered the fading paint of the original era, as well as the gold gilding that once crowned the ornate interior of each cab.

An historic color study, performed in 1988,  guided much of the interior design of the elevator cabs. A hunter green paint, accurate to the era of installation, was chosen to soften the walls. Though the manual operator will be gone, you can still glimpse the magic and majesty of the era in the gold guild shining from filigree at the top of the cab.  Preserved on the walls, the brass and buttons of the original manual system,  allowing each cab to serve as a moving museum of our community’s past. 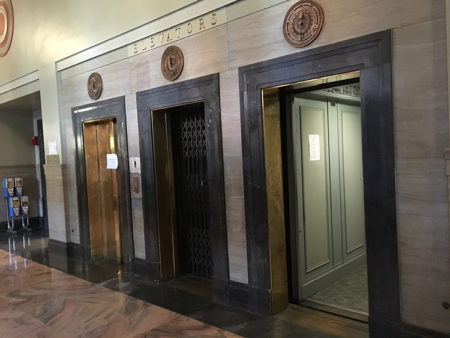 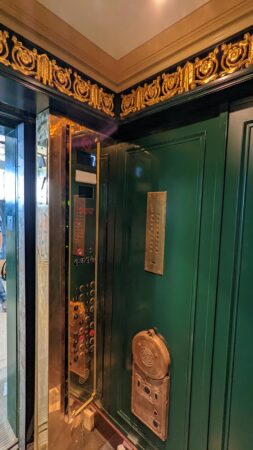 Moving with a modern city

The newly restored elevators have been modernized with fully automated controls and safety features.  City of Asheville Capital Projects staff, with the help of Weaver Cooke construction, MHAWorks Architecture and United Elevator Services,  took on the task of carrying out a respectful preservation and restoration of the old systems while turning the page to provide a modern, sustainable, and safe way of operating elevators in City Hall.

The need to replace and modernize the three manual elevator cabs was identified in 2014. It was determined the original elevators could no longer be maintained without great expense.  In 2019, the City contracted with Weaver Cooke Construction and MHA Works under a design-build contract.  By 2020, the Historic Resources Commission  authorized demolition and construction work to begin.

Since City Hall is an operational building, the elevators were replaced sequentially.  City Manager Debra Campbell took the final ride before today’s decommission.