ASHEVILLE – After an extensive national search, the city of Asheville announced today that Tammy Hooper will become the city’s next police chief, effective July 20, 2015.

The current Deputy Chief of Police for the City of Alexandria, Va., Hooper brings 26 years of police experience to her new role in Asheville. Hooper held a variety of positions with the Alexandria Police Department, starting as a patrol officer in 1989. During her tenure, she served as commander of the Vice Narcotics Division. She later executed the Alexandria Police Department’s Community Policing Plan. Hooper became the first woman to serve in the rank of captain at the department. In 2007, she became commander of Internal Investigations and later commanded a Patrol division. Additionally, as a Support Services Division commander, she gained experience in property and evidence oversight, emergency communications and planning, and accreditation.

Among her notable accomplishments Hooper implemented a recruit mentoring program and reduced recruit officer attrition from 38 percent to 3 percent.

“Besides her proven track record as a leader, Tammy brings a diverse set of skills to the Asheville Police Department,” said City Manager Gary Jackson. “Her experience in managing complex systems and her exceptional communication skills make her a great fit.”

“I believe that effective leadership begins with communication,” Hooper said. “Staff needs to know that their leaders value them and their contribution to the organization. Mentoring, training and promoting professional development are important ways to convey that message.”

After her long tenure in Alexandria, Va., Hooper said she is excited about her move to Asheville. “It is a beautiful, vibrant city. I am eager to get to know the police department, other city departments and the community as a whole,” she said.

Hooper is a graduate of George Mason University in Fairfax, Va. She earned a graduate certificate in criminal justice from the University of Virginia. She also received training at the FBI National Academy in Quantico, Va.

Jackson’s selection of Chief Hooper comes in the wake of a community engagement initiative launched during the City’s search for a new police chief. In February, the City held two days of community input meetings to get feedback from citizens as well as Asheville Police Department employees. That input was used to develop a profile reflecting the core competencies, professional characteristics and traits, education, experience and other factors people wanted in a new police chief. Earlier this month, the public and police department employees were invited to meet the four finalists for the job, to hear presentations by them and then offer feedback to City of Asheville executive management. Finally, the process concluded with in-depth interviews between the city manager and the finalists. 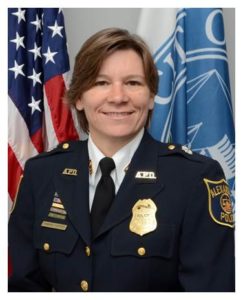