View of the  French Broad River from the Clingman Avenue bridge Monday, Sept. 17.

The sun is shining and the Swannanoa and French Broad rivers are in their banks following Sunday’s nonstop rain from Tropical Depression Florence. The storm brought minor flooding to the Asheville area Sunday, Sept. 16.

Sunday evening, the City of Asheville closed Azalea Road as the Swannanoa River overflowed its banks. By mid-day Monday, the minor flooding had receded. Asheville Public Works crews  cleaned silt off of the road this morning and reopened Monday afternoon.

Also Sunday, the Asheville Fire Department performed a swift-water rescue of two people found stranded on an island near Lowe’s. Both were unharmed.

At 8:43 p.m. Sunday, the City used its emergency notification system AVL Alert to notify people of the potential for flooding along Swannanoa River Road near Biltmore Village, in Biltmore Village and along Amboy Road near Carrier Park.

For the most current river flooding information locally and statewide, visit the NC Flood Inundation Mapping and Alert Network.

According to the National Weather Service: 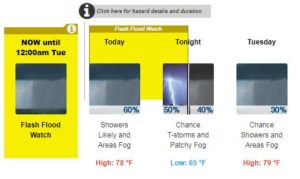 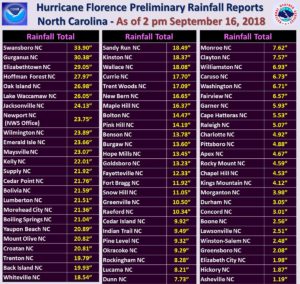 The storm’s effect has been profound in the eastern part of the state. As flooding continues to inundate North Carolina, the death toll from Florence has risen to at least 31, with 24 deaths confirmed in North Carolina.

Flooding is going on in many parts of coastal North and South Carolina.

“There is no access to Wilmington,” said Woody White, chairman of the board of commissioners of New Hanover County. “Our roads are flooded.” White said food and water would need to be flown into the coastal city of nearly 120,000 people.