The City of Asheville and the Public Art and Cultural Commission held a rededication ceremony for the Urban Trail Station 15 Market Place at 1:30 p.m. June 19. The station is located on Walnut Street between North Lexington Avenue and Broadway in downtown Asheville. A reception followed the ceremony at 5 Walnut Wine Bar, across the street.

The Asheville Urban Trail, a walking tour of downtown Asheville, highlights the unique architecture, people and historic events of the city. All 30 stations include interpretive art or a storyboard about the station.

The original Urban Trail Station 15 Market Place, installed in 1993, depicted a bronze apple basket and bonnet resting on a bench as they might have in the 1800s when the area housed produce markets and livery stables. The station was recently redesigned to remove the artwork from the bench and create an interpretive pedestal to exhibit the artwork.

The new station was designed and fabricated by Black Mountain sculptor Julia Burr using aluminum wagon wheels backed with a panel of Cor-ten steel with a laser cutout of a horse head. The existing bronze apple basket and bonnet are incorporated into the wagon design as both sit on the wagon seat. The concept is reminiscent of horse and wagon delivery by pioneers during Asheville’s frontier era.

A bronze plaque on the nearby brick sidewalk reads: “Marketplace: Just off the square, which was the commercial center, Water Street catered to farmers bringing their products into Asheville for barter. When its natural springs began disappearing in the late 1800s, Water Street was renamed Lexington Avenue. Buildings once housed livery stables, produce markets, warehouses, hardware stores, and a shirt factory.” 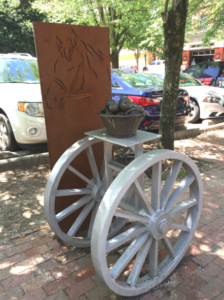 To draw attention and pay homage to the 20-year history of the Urban Trail, 5 Walnut Wine Bar will host an exhibit titled “Urbania: Strolling the Urban Trail,” June 19–July 15. This small exhibit will feature contemporary photography and interpretive art showing a number of Urban Trail stations, as well as the cat and mouse marquettes (models) originally sculpted by Vadim Bora for Urban Trail Station 9 Cat Walk on Wall Street.
Asheville’s Urban Trail and other public art
The Urban Trail is part of Asheville’s Public Art Program which the City oversees with assistance from the Public Art and Cultural Commission. In addition to the Urban Trail, Asheville’s public art collection includes Pack Fountain, Energy Loop, the Martin Luther King, Jr. Memorial, and most recently, Daydreamer, a dimensional mural over the exit of the city’s public garage on the north side of Asheville Aloft Hotel.