Hazardous weather persists in the Asheville area. Many streets are still snow and ice covered and may re-freeze tonight.  Motorists advised to use extreme caution when traveling.

Winter weather advisory conditions for tonight call for for black ice and severe wind chills.  Frostbite on exposed skin can occur within 30 minutes.

With 3 inches  of snow and frigid temperatures in the teens Wednesday, Jan. 17, we have some service impacts and safety messages to share.

Asheville City Hall was open as usual today and will be open Thursday. The National Weather Service has issued a Winter Weather Advisory for our area. This afternoon, they issued a roundup of snowfall totals.

Due to snow-covered and icy roads ART bus service operated on a delay this morning, with a predicted start time of 11 a.m. That changed to nine routes in operation, some of them offering a limited service. The latest update has last bus start times on the routes that are running to be around 5 or 5:30 p.m. Service is expected to resume around 10 a.m. Thursday. 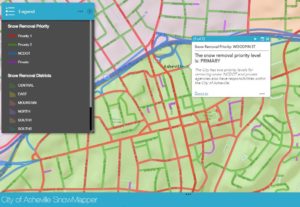 City Streets Division crews spent Tuesday prepping Asheville’s 400 miles of roads by spraying a salt brine on them. The crews worked through last night and are out working this morning to treat and clear roads using plows and spreading salt, focusing on priority 1 streets first, as these are thoroughfares needed by first responders for emergency access.

The priority 2 roads are mostly neighborhood and subdivision streets. 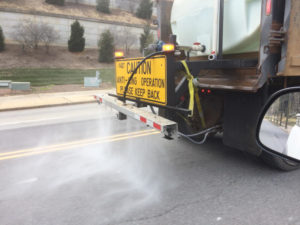 Because our secondary roads are still slick and snow covered, the City will cancel sanitation pick up today.

Trash and recycling for Wednesday customers will be collected on Friday, said Sanitation Manager Jes Foster.  (This includes downtown customers.)

“We plan to service Thursday customers on their regular day once road conditions improve,” she added.

Brush collection will resume when roads are clear, but operations are running behind due to the Monday holiday and snow.

Now that we have your attention, we are talking about parking in the City’s parking garages. During snow events, the City urges motorists to move cars off the streets and into the garages to better accommodate the snow plow / street treatment operations.

The exit gates for the City’s four parking garages will remain open until 10 a.m. Jan. 18.

This. Yes, the priority 1 streets such as Merrimon Avenue shown here have been treated. But it was still snowing off and on through much of today. Also when it’s not actually snowing the wind is blowing the snow all around. If you can avoid driving, please stay safe and off the roads for now. They remain slick and icy in places, especially on priority 2 streets.

Both Asheville City and Buncombe County schools were closed today and have announced that they will be closed again on Thursday.

The U.S. Cellular Center box office is closed today and will reopen at 10 a.m. Thursday.

Governor Roy Cooper today declared a state of emergency and urged North Carolinians to stay off the roads.

Meteorologists are predicting at least 1 to 2 inches of snow for nearly the entire state, according to the governor’s press release. Portions of central North Carolina are expected to see 2 to 4 inches with locally higher amounts of 5 to 6 inches in some areas.

The governor’s declaration triggers a state law against charging excessive prices during an emergency, such as for gasoline.

When City schools are closed City boards and commissions are cancelled for the day as well. That includes today’s scheduled meeting of the Sustainability Advisory Committee on Energy and the Environment (SACEE).

Tonight’s scheduled Blue Ribbon Committee on the Human Relations Commission  meeting has also been cancelled. Please contact Jaime Matthews at jmatthews@ashevillenc.gov if you have any questions. #AvlNews #AvlGov

Check back for more updates. We will share information here as it becomes available.