The City of Asheville’s Riverfront Redevelopment Office invites everyone to attend the informational public meeting, “Grilling on Greenways” 11 a.m. to 1 p.m. June 27 at the Carrier Park Pavilion, 220 Amboy Road.

Construction of these projects will take place from 2016-2019. When completed, the greenway system of the River Arts District will have 11 miles of continuous greenways. The completion of Beaucatcher Greenway will provide another 1.5 miles. The combined greenway network, the “River to Ridge” will connect the River Arts District to the South Slope neighborhood, downtown and Beaucatcher Mountain.

“We want the public have the opportunity to understand what kind of connected greenway system is about to happen. We’ll be seeking public input at this event on both the French Broad River West Greenway and the Beaucatcher Greenway,” said Lucy Crown, Greenways Coordinator.

The public is welcome to attend this drop-in session. Hot dogs and other refreshments will be served.

During the past decade, the City has built several sections of greenway, which have become an integral part of Asheville’s landscape. Now the focus turns to completing new greenways and connecting them into a contiguous system.

Thanks to New Belgium’s donation of land along the river, the first portion of the French Broad River Greenway Westbank is underway. Other planned greenways include the final segment of the French Broad River Westbank Greenway, the multi-use path of the Riverway Road Improvements, the Town Branch Greenway, and the Clingman Forest Greenway. All of these will be constructed with the assistance of federal TIGER funds. Construction will begin in 2017. The Beaucatcher Greenway design is also complete and will be partially constructed on the western side of Beaucatcher Mountain by 2019.

In addition, on-road “greenway connectors” will be constructed during the next five years on the roads that lie between the trail heads of three greenways. These connectors will guide bicyclists and pedestrians to their destinations by linking sections of greenway with improved and clearly-marked sidewalk sections. The first connector is along Depot Street and Clingman Extension and will connect the Clingman Forest Greenway and Town Branch Greenway. The second connector will be between the trailhead of the Town Branch Greenway on McDowell Street to Memorial Stadium, which is the trailhead to the Beaucatcher Greenway. 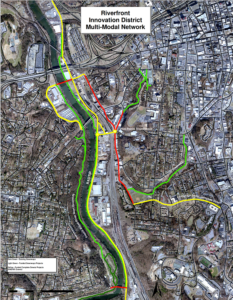