The things that make Asheville great, and the changes we would most like to see, are most often found right outside the front door. That’s why neighborhood organizations can make such an impact both in their own back yards and city-wide. 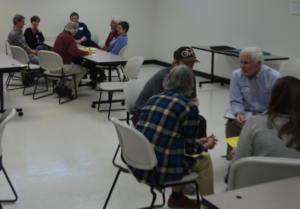 More than 100 people representing 25 groups participated in workshops discussing everything from creating newsletters and governing associations to preventing crime in neighborhoods.

Anita White-Carter, from the Shiloh Community Association, who participated in a discussion on governance for associations, said the program will help strengthen her neighborhood. “One of our concerns is getting more neighborhood members to engage more,” she said. “And events like this promote that.”

Stuart Greene, from the Devonshire Neighborhood Association, attended a crime prevention workshop in which Asheville Police Department officers offered tips for making neighborhoods safer. “I liked the format. I thought it was a very informative class,” he said. But he added that, since Devonshire is adjacent to Hendersonville Road, his association is also closely following progress on the 5.3 mile sidewalk project currently underway there. “We’ve become so dense in that area,” he said. “I hate to see people walking and have to step on and off the street.” 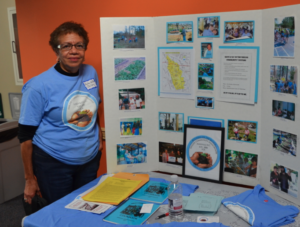 Sidewalk safety was on the minds of East Asheville neighborhood representatives Kim Martin-Engel and Debra Copp as well. Both pointed to sidewalks on Tunnel Road as evidence of the impact the united neighborhoods can have, and said they want to continue working with the City of Asheville in the area of pedestrian safety. In the meantime, the group is also working to establish an East Asheville Neighborhood Alliance.

“This event is good chance for an exchange of ideas and increasing awareness of issues, Martin-Engel said. “It’s an opportunity to talk to some other people about the issues they face in their neighborhoods.” 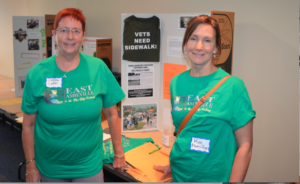 To Neighborhood Advisory Committee chair Elaine Poovey, the positive reaction to the event is evidence of the enthusiasm people have for their neighborhoods and for opportunities to share with one another.

“I was very pleased with the turnout, and the networking that occurred was exciting” Poovey said.

She also shared thanks she heard for the people who led workshops. “They were very well received and the presenters were praised for providing very helpful information,” she said. “I got requests for some of the participants to do this event every year.”

If you would like to include your neighborhood association on future notices, please contact Neighborhood Coordinator Marsha Stickford at mstickford@ashevillenc.gov.