Can you tell when you walk or drive through Asheville that there is less graffiti?

City Public Works Director Greg Shuler can. “I know I may be more in tune with actually looking for graffiti than others, but I can tell we’ve made a positive difference,” he said. “As I drove down Haywood Road just yesterday, I saw a man and a young child painting over a tag together on a retaining wall.”

The City’s 1-2-3 Graffiti Free cleanup assistance program continues to help property owners fight the proliferation of tags and illegal murals on buildings. Launched in the summer of 2014, City Council voted last fall to extend the assistance program through Sept. 30, 2015.

Property owners who have not participated in the program yet are eligible for up to $500 as a one-time payment toward graffiti cleanup. The money is available through Sept. 30 or until the funding is exhausted.

Curious about how many tags have been removed or how much money the city has invested?

So far, the City has spent $76,548 on graffiti removal, according to Vicky Haskell, Graffiti Special Projects Coordinator. That money was paid to contractors who did the removal.

While Asheville is making strides toward reduction of graffiti, these crimes continue to occur. On July 1, Asheville Police arrested two well-known graffiti offenders whose tags have recently been painted in several downtown locations.

Also a recently passed law in North Carolina stiffens the penalties for graffiti vandalism beginning Dec. 1, 2015, making it a Class 1 misdemeanor punishable with a minimum $500 fine. Moreover, a third charge of graffiti vandalism will become a felony, if there have been two or more prior convictions, under the new statute. Gov. Pat McCrory signed the bill into law in June.

“This new law will not in any way change the way that APD has been going after graffiti offenders,” said Asheville Police Sergeant Jackie Stepp. “We take vandalism very seriously and charge those that participate in this activity accordingly.” 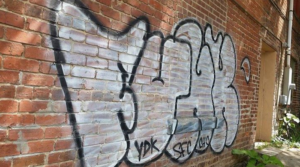 What you can do

Use the Asheville App to report graffiti in your neighborhood. Download the app on your smartphone or go online to http://bit.ly/1AIx5Gi. On the Asheville App you can upload a picture of the graffiti vandalism along with the location. City workers will acknowledge receipt of the report and you can follow it though its resolution.